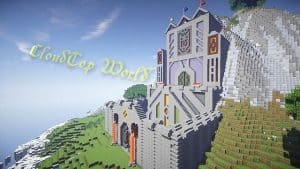 Steve’s hypothesis of this being a new, inhabited world were correct. Just a mile away, he caught a glimpse of a small tower, perched on a mountaintop. He walked towards it, hoping to find details of where he was. As he reached the edge of the mountain, something bigger stood before him; a large, long wall, and a gate leading to the other side. He ran for it, only to be shocked by a warning horn from the mountain tower. Immediately, over ten archers appeared at the wall, all aiming their bows at him.

“No one enters without invitation from the Governor” one cried.

Steve didn’t know what the guard meant or even who this Governor was, so he shouted back stupidly,

“What is this place?”

“It is the Stronghold, the Trade Centre of this World”

“And what is this World?”

The guard blinked at him, completely bewildered. However, he answered, none the less.

“Sir, don’t you even know? This is CloudTop; the World above The Clouds. Enter, and I shall tell you what you need to know…”

The Stronghold is second most powerful settlement on CloudTop. The walls are harder than the hide of the EnderDragon. It was once built for battle, but its days at war are over. Instead, it is the centre of all trade on CloudTop. Inside the walls, you lose the sense of fear you once had, and gain the sense of power and protection. The centre of the settlement is situated on top of a giant platform. Around it can be found a blacksmith’s, some shops, stables, a warehouse, an inn and some houses. More shops and three jail cells are built into the platform, making the most of the area. The platform is host to some houses, including that of the Governor and a gallows; although their time with death is over, thieves cannot go unpunished. A watchtower stands guard to warn the archers below of approaching personnel.

Although magic doesn’t form much of CloudTop, there is still a home for it, on a small island, over a kilometre from the Stronghold. It is home to those with great knowledge and the ability to cast magic; the wizards. Defying the laws of physics, this tower reaches up to the sky above the clouds. It is mildly protected by a moat to prevent it being overpowered from all sides. Most noticeable about it is the platform that holds a book on an obsidian table; the Book of Storms. Legend has it that if anyone but a wizard were to read this book, the clouds would open up below them, casting them down to the land of Minecraftia below.

The World of CloudTop isn’t completely heavenly; there are one or two black clouds. The most distinct is that which holds the Black Tower, Home of Demons and Hades. One an island made completely of obsidian, this tower reaches higher than the Wizard’s Tower. On its front, it bears the face of a creature. A locust? A demon-angel? Hard to tell. Inside, anyone brave enough to enter may find an obsidian forge, a brewery, a storage for jewels and a mysterious portal to another dimension. To both sides of the tower are two smaller ones, which bear the Crystals of Heaven and Hell. With the power of both combined, they secretly plan to overthrow CloudTop – if they can find a way off the island!

The most picturesque settlement on CloudTop; RoseBush Village has no historical background as it is so isolated and independent, it has not changed for over one hundred years. Though it isn’t the richest settlement, its exports focus on agriculture; wheat, livestock and even flowers. Most of the village holds cottages as homes for its settlers, but there is the impressive Lord’s Manor, across the road from the church. Behind the church, there is a single wheat farm, refreshed by a water tower, which provides most of the village’s food supply. If anyone were to stay at CloudTop, they are most likely to live here.

Although it resembles strongly to the entrance of a dwarven mine, the Mountain Kingdom doesn’t host a mine; not on a floating island with a depth limit! Truthfully, no one outside has ever been inside the Kingdom, and no one has been seen leaving it. Yet the beacons outside the front gate are still lit and the faces on the walls still spout fresh lava. To many, the faces strongly resemble dwarves in helmets. Maybe the old tales are wrong…

The smallest settlement on CloudTop, this village has no recorded name. It resembles strongly to a Motte and Bailey Castle, but there is no keep on top of the hill, but a wooden watchtower. In the Bailey below, there can be found a village hall, a small chapel, a stables, and an elevated living quarters. Although it looks completely poor, it is still a strong settlement at heart with the scars of war.

Even law and order must be maintained in heaven! The Island Prison is home to both a prison and a military base. Many say the soldiers practice their swordplay and archery with the prisoners. On one side is the prison, where there are many small, crummy cells, but these prisoners aren’t to live a life of luxury; they are here to serve a penalty of death against their crimes! Each cell faces towards the stand of gallows, where they will eventually end their lives. On the other side is the military base, which holds a living quarters, an armoury (under lock and key!) and clear space in the middle to practice combat and routines. In the corner near the gate are the kitchens, which provides food for the soldiers, guards and prisoners. 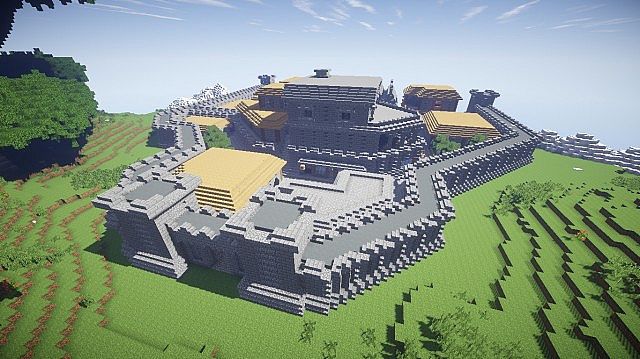 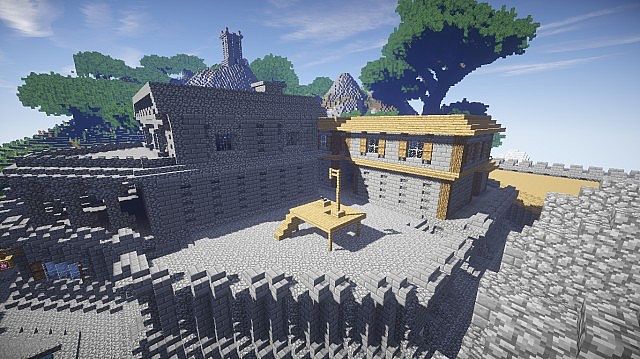 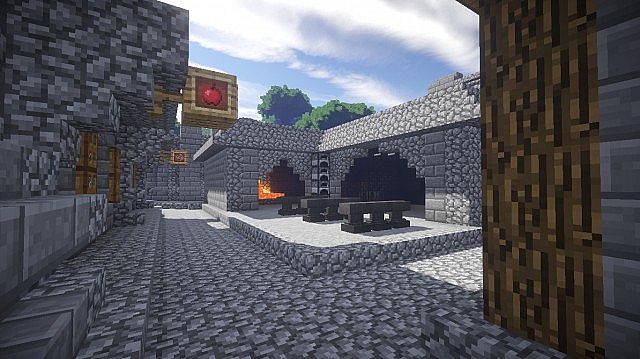 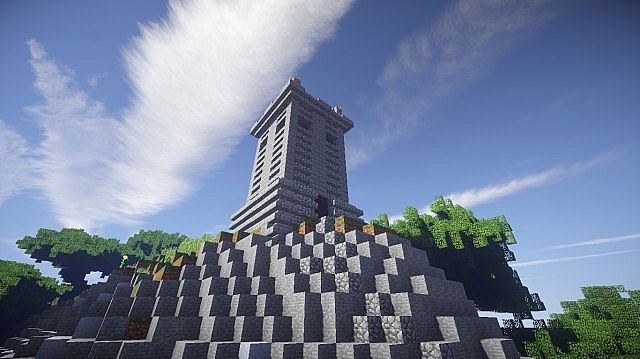 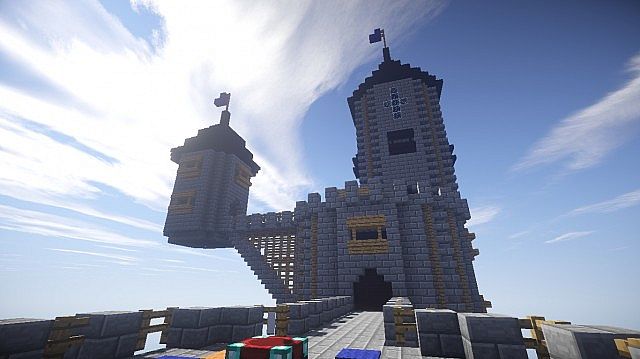 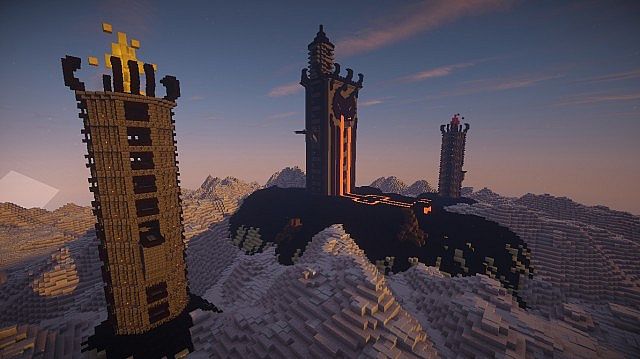 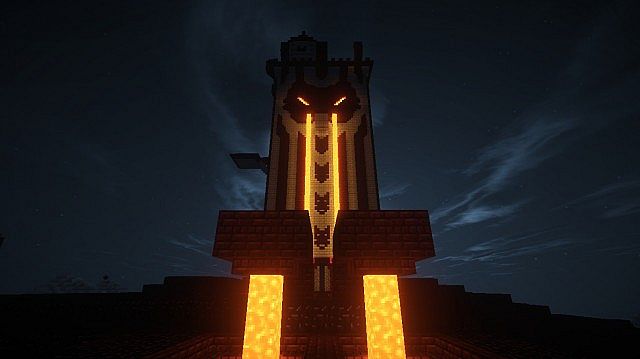 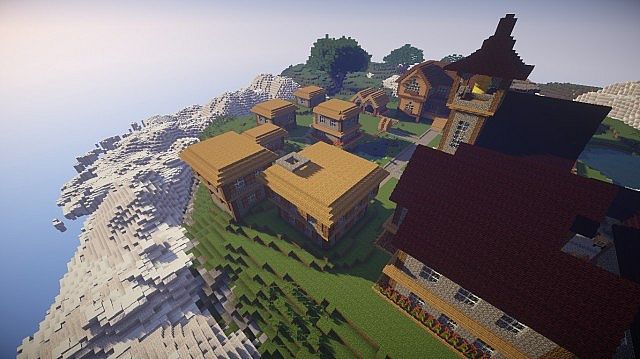 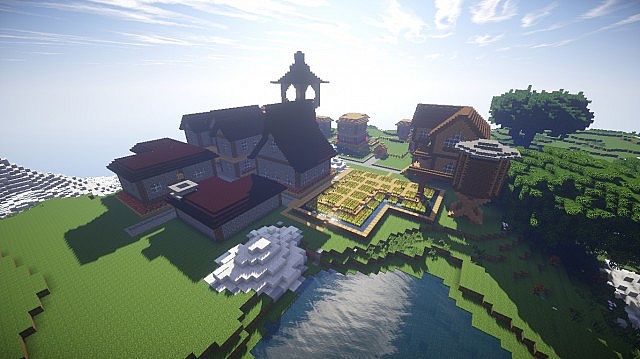 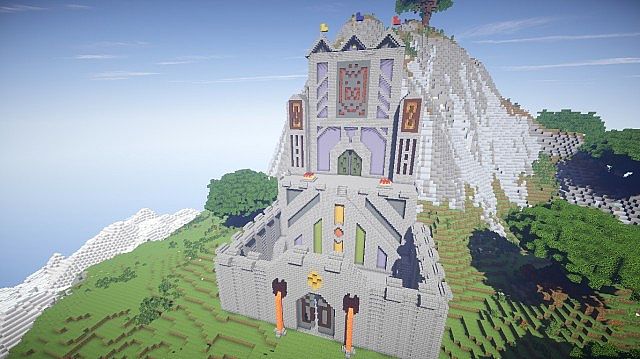 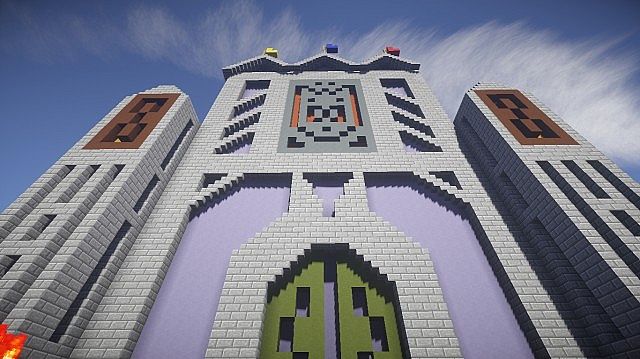 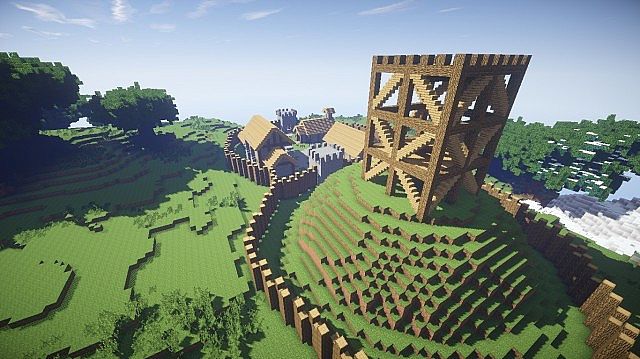 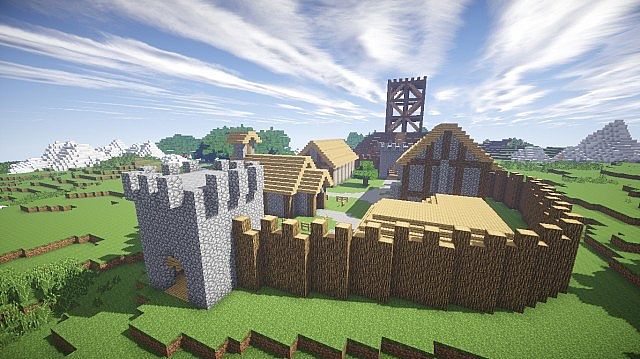 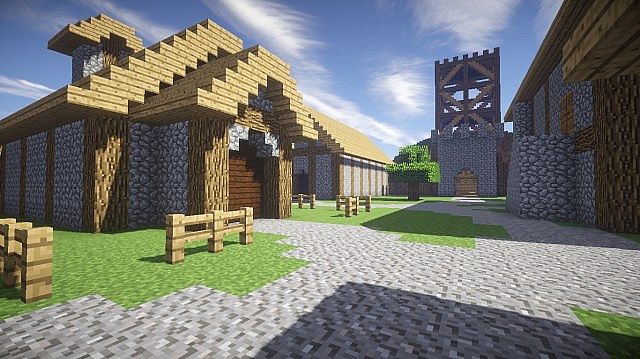 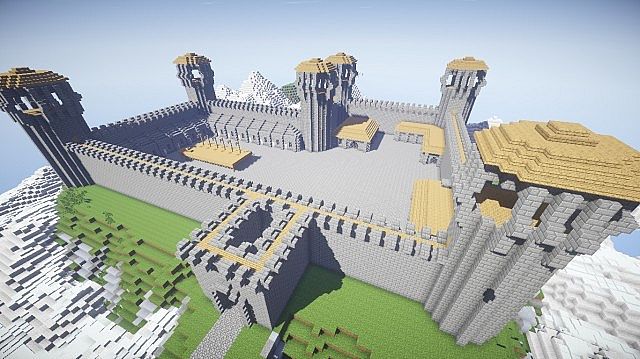 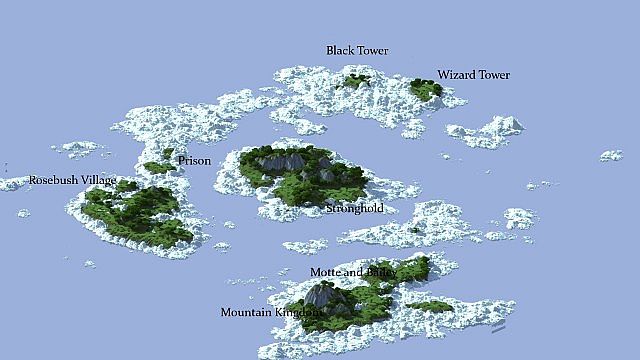 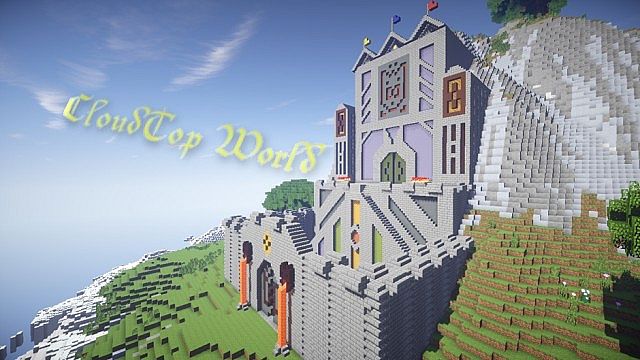 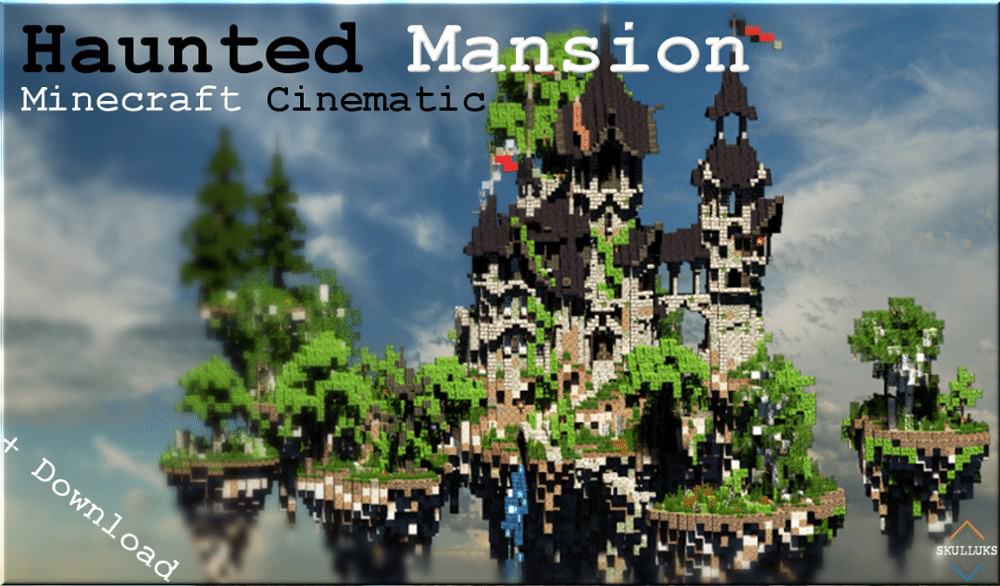 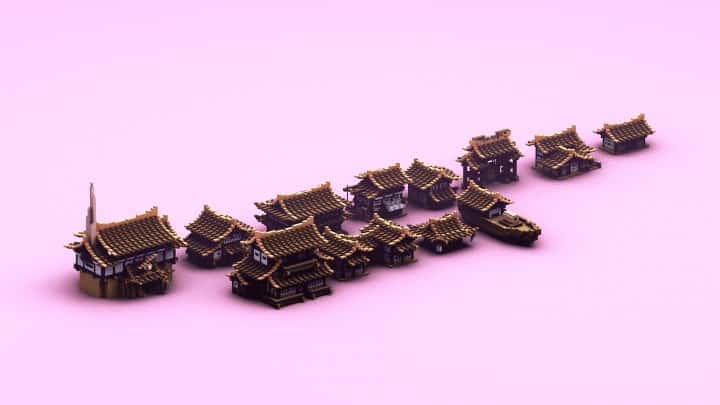 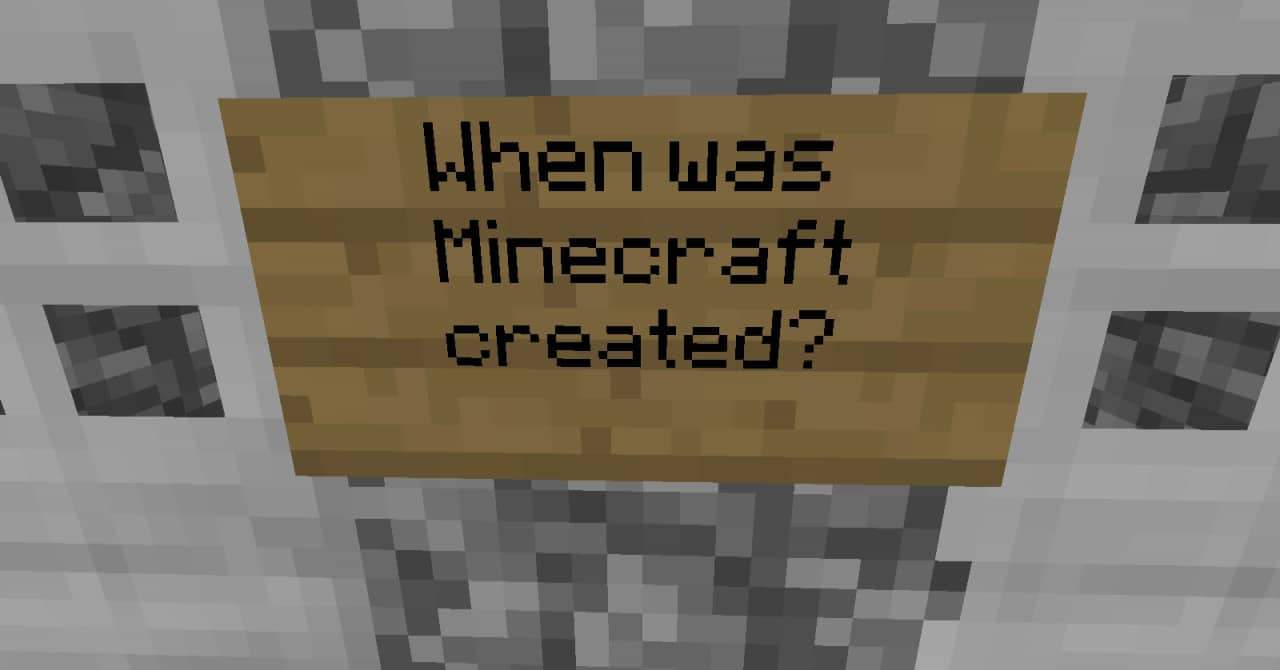